Brands spend millions of dollars for the adverts but they draw consumer’s attention for a couple of minutes, no more. So the message on the advert doesn’t reach the consumer but it is possible to use adverts more effectively with a neuromarketing-based approach. 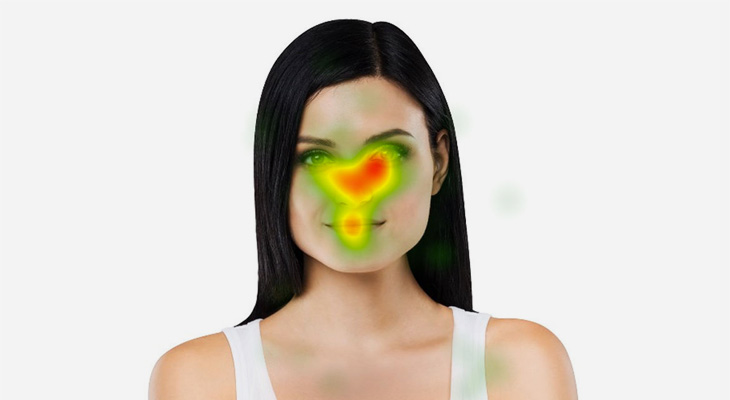 Adverts don’t awaken any interest in a consumer who is exposed to tens of advertisements in a day. Even it does, the consumer looks at the advert for a just couple of seconds and keeps going without really looking at it. That is why it is vital for brands to give the message to the consumer at the first moment that he looked at the advert. Today, we will discuss that issue in our writing called neuromarketing examples.

Research made with female subjects

Proportion and the design of the women figure are exactly same in these two visuals. Even then, consumers look more at the second visual compared the first one. But Why?

Humans have the ability to empathize as a result of their nature.

Imagine sitting and talking face to face with a friend in a café. What would you do if all of a sudden your friend starts looking at something at your back, not you? Well, probably you turn your back and start to look at the same thing too.

Yawning after someone else yawns in front of you or things like that are all related to mirror neurons, in other words, your ability to empathize. If you want to learn more about that issue you can read ‘Mirror Neurons and Its Effects on Advertising.’

At that point, our brain develops an empathy with the women figure without noticing whether it is a photo or not. Then, we start to look at wherever that women figure is looking. In a situation like that, the consumer would look at the message that brands want to give in that advert. In that example, it is a logo but it might be something else such as the product or the logo etc.

The heatmap of the research below made with male subjects shows us the same results. It is one of the another neuromarketing examples.

Research made with male subjects.

It can be said considering this research that if the face of the figure will be put on the advert that big, it could be beneficial to be careful about where the figure will be looking. That kind of information would be the reference point for the future designs.

As Designneuro, we use the data that we collect through our research made with ThinkNeuro for our designs for every chanel that we work on.

How Neuromarketing
Has Changed the World
of Marketing.