As a result of their nature, men and women differentiate from each other. That differentiation may cause problems when it comes to advert that is prepared for a specific gender… 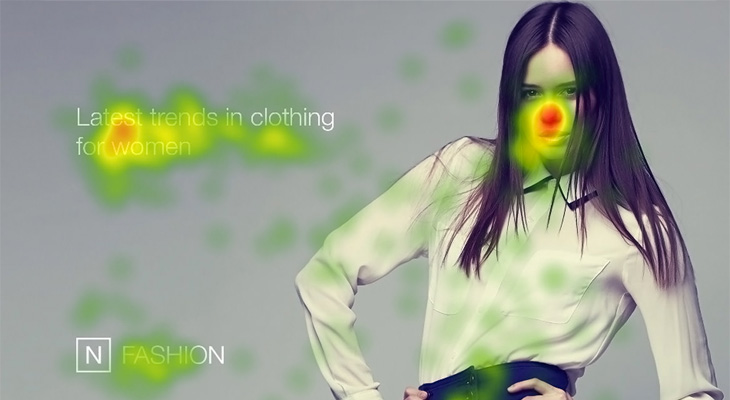 All the brands, notably clothing ones, separate audience according to their gender while determining the target audience. Then, they designate the strategy and send a brief to the advertising agency. At that point, an agency needs to care about some issues. One of these issues is the differences in perception between men and the women. Today, we will discuss designing an advert according to gender differences in terms of neuro design principles.

As a result of their nature, women and men are following two different paths. That difference is about how we perceive elements surrounding us. At that point, while man’s brain is following a more systematic path, women’s brain works empathy-focused. That situation causes a change on what men and women see when they look at an advert. That is an important point for a brand when it comes to giving the message directly to target audience.

Let’s examine that situation on examples,

From this viewpoint, it can be said that if the face of the figure is remarkably close, women may focus on the face more than the slogan itself. As a result of that situation, that ad is unsuccessful in terms of neuro design principles.

On that ad, the figure is placed full length.

Both men and women subjects focused on the face less than the first example. So that they can see the slogan on the billboard. Unlike men, women subjects observed the shoes of the figure too.

From this viewpoint, it can be said that if the face of the figure is used smaller and less detailed, it might help slogan to become more visible. On the contrary case, women subjects have the tendency to focus on the face and the details of it.

Also, if the face is placed behind the shoe and the skirt might draw more attention. That situation may be something that a clothing brand might desire.

In the light of such information, in an advert whose target audience is women, it is clear that advert is more beneficial in terms of neuro design principles.

Both men and women are focused on the text. But since it is hard to see where the figure’s eyes are looking, it can’t be said that subjects are influenced by her line of vision. To learn more about the line of vision, you can read the article called Neuromarketing Examples - 2 adlı yazımızı okuyabilirsiniz.

The goal might be to create a perception, represent the brand or give a message while designing an ad. That message might be about promotion, discount or brand slogan. Brand might want to represent the face or the clothes of the figure according to their strategy. That is why the brand needs to determine what it wants to highlight while designing an ad and photo shoot needs to be done according to these facts.

If you liked that article "Neuro Design According to Gender Of The Target Audience", don’t forget to share!

Pareidolia and
Its Effect on Design.