In this article, we will move forward in the line of social media and neuromarketing, taking into account the psychological motivations of the consumer. 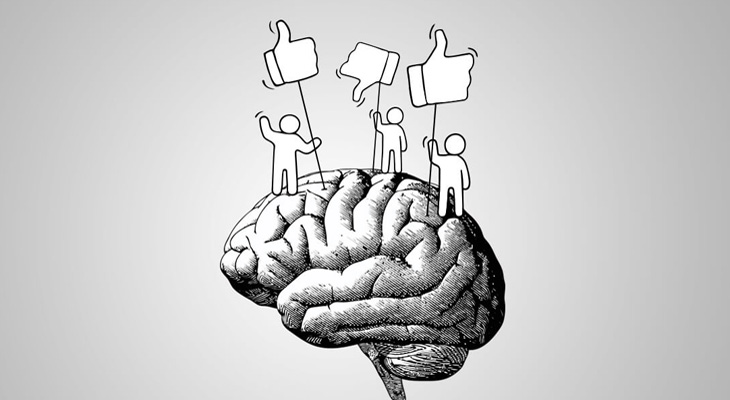 Before commenting on the social media with neuromarketing point of view, a brief introduction for the ones who do not have enough information about the neuromarketing:

Neuromarketing is a research branch which measures the emotions and experiences of the customers and tries to find their equivalences on the mind. Since it allows the brands to understand customers with scientific data, it is substantially demanded.

If it is necessary to define social media, it is a collection of channels that present us with digital reflections of people we see in everyday life. Accordingly, it is very important to understand the mind structures of the customers to be successful on social media works.

The most important difference between the social media and real life is; People have an opportunity to represent themselves and their lives by brightening on social media.

This situation leads the following: when people look the lives of others, they feel depressed thinking ‘his/her life is better than my life’ or ‘I wish I could live the same way he/she lives… and then they start to compete their lives with other brightened lives that they see on social media. Everyone does it somehow

FOMO: Fear of Missing Out

There is a definition of these ‘if only…’ emotions that we get from the lives of others: FOMO standing for ‘fear of missing out’ (The fear of losing, missing).

These ‘if only…’ emotions which are usually acquired without awareness create various emotional motivations on the mind and as a result of this, users consume somehow. This can be buying a product, liking an account or a teenager’s hanging a Ferrari poster that he is never able to buy on the wall. (The example of Ferrari is belonged to ( Ap. Dr. Kaan Varnalı)

The impacts of these motivations on consumer behavior also overlap the academic merits of marketing communications. If they do not overlap, probably the brands could not have such great effects on people. In today’s world which competition is very high, brands have to create a sense of ‘will’ in people and/or to offer a solution for this ‘will‘. Phenomena in the social media create role models regarding our consumption way while they present these “will” emotions to us. 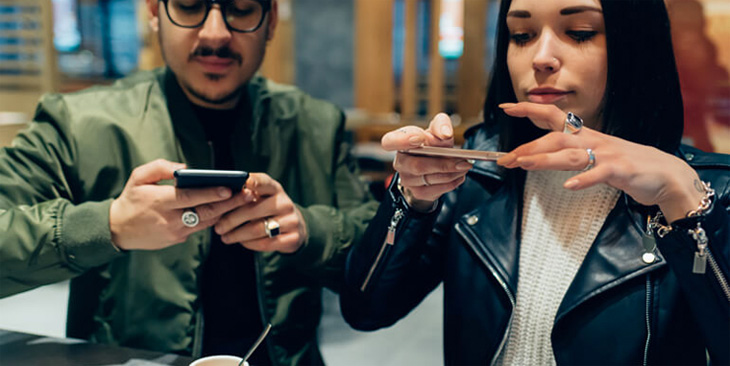 By following phenomena we follow the agenda, travel, cook, interest in fashion, see what we missed out and feel ‘updated’ thanks to them.

Each emotion and motivation has an equivalent on our mind. Some of them provide modelable effects. For example, Mirror Neuron. The same neuron is one of the survival mechanisms of the brain. In fact it is also known as ‘imitator neuron’. When someone itch herself/himself or yawn, we also do same thing. “Mirror Neuron” leads us to like the people that create the sense of empathy, are similar to us, speak like us and have common ideas with us.

In a way, we follow the people that we want-to-be or the people who make real what we want to do more. If we look at the mirror neuron in general, it has serious effects on every subject on us. If you are interested, you can also read our neuron article. This neuron locates at the awarding part of the brain’s limbic system.

When the desire points in the brain of the users named Nucleus Accumbens take action, users’ desire to consume is also triggered.

Let’s provide a quotation from ekşi sözlük (a famous reddit like web site from Turkey) about Nucleus Accumbens:

“It is the awarding center of the limbic system. It is the moving brain part of a dolphin that grabbing a fish after it completes its performance, a cat that is cared after it presents some sweetness, a businessman or business woman who is awarded with a cheque after he or she accomplishes his/her task, a teenager boy who achieve to chat up with a girl after he efforts too much and a Muslim who counts his beads and reads a verse from the Quran.“

The effects of mirror neuron and its effects on social media

Right and wrong are hidden on small details! We above mentioned that the lives of influencers on social media, the consumptions of the ones that are thought as role models lead to trigger some brain parts of the users without their awareness and so the sense of “will” rises.

Many phenomena accounts direct the right senses of our brains, so they become successful. We are curious, we want to learn, see, perceive, we like to gossip.

However, we cannot see the real faces that give the emotions we seek for, stories, experiences and the messages that can trigger the sense of wonder of users and their mirror neurons. When we cannot see them, these accounts don’t function. They do not operate! They are underwhelmed.

However, we can closely examine the faces and the lives of these people. We can mirror where they travel, what they ate yesterday, their clothes they wear today and even we can mirror which clothes we will wear tomorrow from these accounts. This data provides a sense of learning and satisfaction to users.

An influencer uses a product of one our brands and on that week the stock of this product can deplete in a sudden. Such an effect! This is mirror neuron!

Social media is very powerful, but when it is used correctly.

That is why many brands’/agencies’ using stock photos without any efforts instead of creating real contents has a negative effect on the followers. A message that is written on a stock photo does not motivate anybody, nobody wants to see this unreal person or message, naturally interaction hits bottom. Then too much ‘unfollows’ arise instead of ‘follows’

Let’s take a look at the effect of the visual as we enter the issues about the visual. The importance of the quality of the visuals and the effect of the text to be used on social media ads is well known by Facebook. Thus, Facebook limits the writings on the ads visuals for a long while. Otherwise the ads would fail, Facebook cannot earn money and with this reason ads should be successful.

Recently, Facebook has set up its own neuromarketing department!

So now, they will be able to investigate which types of visuals have a better effect on users’ minds, and they can also direct agencies to do better work. 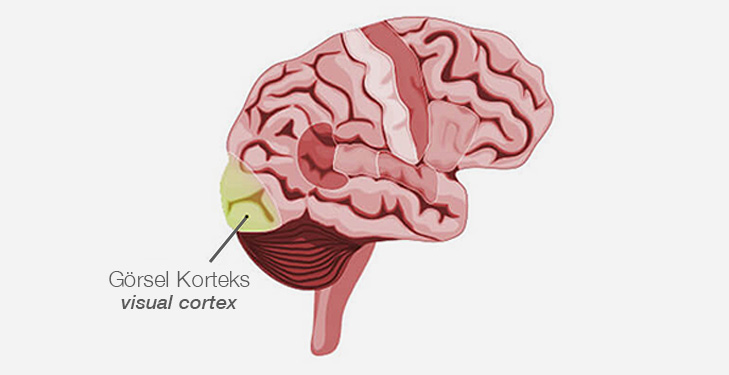 One of the reasons why visuals are more effective than texts is that Visual Cortex which locates in the human brain is highly developed. The visual cortex, one of the defense mechanisms of the brain, is actually what allows you to transmit an event you see to primitive brain and react to it before you perceive this event in your logic frame. (If you are interested, you can also read

For example, when you see something falling from the tree, your brain has the power to perceive whether it is a snack or a tree branch and react according to it before you realize. This is also very valuable in terms of brands. (You can see visual cortex article

The time to look at the images in social media is probably less than a scroll!

The time taken to look at the content on the social media is very limited, just like in a scroll. In this respect, the visual of the message that is tried to give should be so good that it should be able to transmit the clear message and emotions to users in minimum time.

One of the important points to grasp users in the visuals is first influence and then direct to the content. However, in the first step, user’s being over-exposed to messages can lead to the increase of cognitive load and thus decrease of user’s interest towards content.

In fact, this can lead a non-examination of a notice or closure of a web site!

There is a serious difference between perceiving a visual in a second and perceiving it by reading as a text. Human beings are visual creatures, therefore it is important to transmit a message with effective visuals in social media. We wish this text could be expressed in full visuals, but then it would not be in line with Google. You cannot possibly reach this content because you cannot make enough meaning by reading artificial intelligence images yet.

The brain has evolved over thousands of years in order to reach the level that will quickly make sense of the visuals.

In the past marketing world, it was enough to tell about the product of the need to consumers. However, today there are many competitors of the same product. There is no time or energy to reach the most optimum product by comparing all these products that are needed for any consumer. Nobody can compare all these products; shoes, dress, FMCG products with thousands of variables.

That is why people conduct decision processes with emotional choices instead of logical choices. And they enable it with automatic shortcuts in the brain. And we do not have time or energy to think everything. By the way, thinking takes too much time. The brain weighs 2% of the human body and consumes 20% of the body energy in order to carry out the regular functions. (Morin, 2011)

For this reason, the brands that make up the ‘feelings’ that create the right feelings and complement the missing points in the consumer’s mind are taking a step forward. And behind these, the mirror neuron exists. If you take someone as sample, her/his life affects you and creates an emotion. This emotion affects your subconscious and your buying process is carried out not for the need but for meeting the emotion that you feel lack of it.

n social media messages, it is a necessity to affect the emotions that will replace the messages of “today eat this”, “today drink this” and “today buy this”

If you do not present a “CAUSE” to consumers, do not open that social media account!

One of the most common mistakes brands make in social media is that their presenting inadequate reasons to be followed. Actually, there is a reason behind our following many channels. In today’s marketing which people try to escape from the ads, there is a necessity to give a reason, an emotion.

That is why brands such as apple share happy and joyful life instead of presenting the properties of the phones. That is why Coca Cola sells happiness in its drink advertisements…

When you open a social media account, you should determine why it should be followed and position (it is an important topic for branding) it. You should pre-plan what you will promise to target audience or which products will make them happy or influence them.

Although we started the article with social media and neuromarketing, we needed to mention marketing communication issues in some places in order to draw the frame of the subject. We hope that you can benefit from this information.